Nvidia SLI NVlink and GPU utilization in systems using more than 2x GPU when running Unreal Engine. Fortunately we had a Xenowulf 4x RTX A6000 workstation sitting in the shop so we decided to see for ourselves. 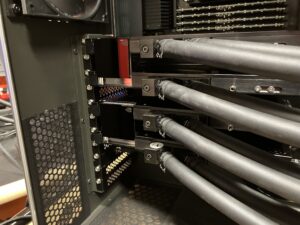 Nvidia’s NVLink is a hardware bridge that allows you to interconnect two graphics cards to enable scaling of memory and performance. We connected two (2) Nvidia NVLinks to the 2-pairs of RTX A6000 GPUs and played-out a real-time interactive demo in the latest version Unreal Engine. Not only did UE take advantage of the additional pair of GPUs but scaled equally across all 4x graphic cards. We then removed the two Nvidia NVLink, went into the SLI configurator in the Nvidia control panel and turned-on the Nvidia software SLI and re-ran the test. We were somewhat surprised to see that we got same results – identical GPU utilization across all 4x cards.

Bottom line – when running Unreal Engine a physical $200 SLI NVLink isn’t required for multi-GPU utilization as Nvidia’s ’embedded’ software SLI works just as well. There are however, a number of use cases where an Nvidia NVLink Bridge is required. We’re hoping to run this test again using 6x GPU system.